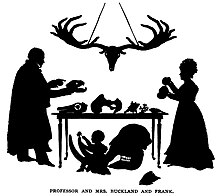 Buckland was born in 1797 in Sheepstead House, Abingdon-on-Thames, to Benjamin Morland,[3] a solicitor,[4] Her mother, Harriet Baster Morland, died when she was a baby, and her father remarried, producing a large family of half-brothers and sisters. She spent much of her childhood in Oxford, living with a physician, Sir Christopher Pegge, and his wife.

According to Caroline Fox, Buckland met her husband William Buckland in the following way:

Both were travelling in Dorsetshire and each were reading a new and weighty tome by the French naturalist Georges Cuvier. They got into conversation, the drift of which was so peculiar that Dr. Buckland exclaimed, «You must be Miss Morland, to whom I am about to deliver a letter of introduction.» He was right, and she soon became Mrs Buckland..[5]

In 1825[3] Mary married Buckland, who later became Dean of Westminster. Their honeymoon was a geological tour lasting a year, including visits to geologists and geological locations across Europe.[6] They had nine children, including Frank Buckland and author Elizabeth Oke Buckland Gordon. The children were exposed to their parents’ collections of fossils from an early age and at the age of 4, Frank could successfully identify the vertebrae of an ichthyosaurus.[7]

Buckland was an illustrator,[6] producing illustrations for Georges Cuvier, a French palaeontologist, and for a work by William Conybeare, a British geologist. She also made models of fossils, and labelled fossils for an Oxford museum. She studied marine zoophytes using microscopes. She repaired broken fossils according to her husband’s instructions.[8]

She assisted her husband by writing as he dictated, producing illustrations for his books, and taking notes of his observations. She assisted him when he was commissioned to contribute a volume to The Bridgewater Treatises. His contribution in 1836 was a mixture of geological and palaeontological science and philosophical reflections.[9]

Mary Buckland amassed a vast collection of fossils and other specimens. She also taught in a village school in Islip, near the family’s country home, where she died in 1857.