Alfred Watkins (27 January 1855 – 15 April 1935) was an English author, self-taught amateur archaeologist, antiquarian and businessman who, while standing on a hillside in Herefordshire, England, in 1921 experienced a revelation and noticed on the British landscape the apparent arrangement of straight lines positioned along ancient features, and subsequently coined the term «ley», now usually referred to as ley line, because the line passed through places whose names contained the syllable «ley».[1]

Watkins was born in Hereford to an affluent family which had moved to the town in 1820 to establish several businesses including a flour-mill, a hotel and brewery. Watkins travelled across Herefordshire as an ‘out-rider’ representing the family businesses and so got to know the area intimately.

Watkins was also a respected photographer. He made some cameras himself and manufactured an exposure meter called the ‘Watkins Bee Meter’ due to its small size and efficiency. An example is in the Museum Resource & Learning Centre, Hereford, and one accompanied Robert Falcon Scott to the South Pole. He was an active member of the Photographic Convention of the United Kingdom and served as its President when the Convention was held in Hereford in 1907. In 1910 he was awarded the Progress Medal of the Royal Photographic Society (RPS).[2] Over 3,000 photographs, taken from Alfred’s original glass negative plates are held by Hereford Library and can be viewed on request.

On 30 June 1921, Watkins visited Blackwardine in Herefordshire when he had the idea that there was a system of straight lines crossing the landscape dating from Neolithic times. He presented his ideas at a meeting of the Woolhope Naturalists’ Field Club of Hereford in September 1921, and published his first books Early British Trackways in 1922 and The Old Straight Track in 1925. Thereafter he spent a major part of his life developing his theory. He published a further book on leys and participated in the Old Straight Track Club from 1927 to 1935 (the papers from this organisation are also in the Hereford City Museum).

Watkins was a member of the Society for the Protection of Ancient Buildings, an authority on beekeeping and a fellow of the Royal Photographic Society. He was also involved in the preservation of Pembridge, Herefordshire Market Hall. 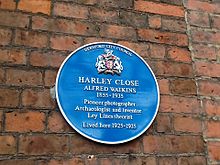 Archaeologists in general do not accept Watkins’ ideas on leys. At first they regarded the ancient Britons as too primitive to have devised such an arrangement, but this is no longer the argument used against the existence of leys. More crucially, there are so many ancient features that finding some in approximate alignment is highly likely. Watkins was sensitive to such arguments and argued for caution. He also drew up a list according to which landscape features could be given values between ¼ and 1 point, five points or more being required as evidence of a ley.

Watkins’ work resurfaced in popularised form from the 1960s following the publication of John Michell‘s book The View over Atlantis in 1969. Michell merged Watkins’ ideas with mystical concepts not present in Watkins’ own work.[3] In 2004, John Bruno Hare of the Internet Sacred Texts Archive (ISTA) wrote:

Watkins never attributed any supernatural significance to leys; he believed that they were simply pathways that had been used for trade or ceremonial purposes, very ancient in origin, possibly dating back to the Neolithic, certainly pre-Roman. .. He was an intensely rational person with an active intellect, and I think he would be a bit disappointed with some of the fringe aspects of ley lines today.

In 2002 Watkins had a beer named after him, «Watkins’ Triumph», brewed by Wye Valley Brewery Ltd.[5]

Alfred Watkins’ Herefordshire in his own words and photographs – publisher – Logaston Press, 14 November 2012. A previously unpublished manuscript, written in 1931.