Herodium (Latin), Herodeion (Ancient Greek: Ἡρώδειον), best known in Israel as Herodion (Hebrew: הרודיון‬) and in Arabic as Jabal al-Fureidis (Arabic: هيروديون‎, lit. «Mountain of the Little Paradise»); also Har Hordos is a truncated-cone-shaped hill, 12 kilometres (7.5 mi) south of Jerusalem and 5 kilometres (3.1 mi) southeast of Bethlehem, in the Judaean Desert, West Bank. Herod the Great built a palace fortress and a small town at Herodium, between 23 and 15 BCE, and is believed to have been buried there.[2] Herodium is 758 meters (2,487 ft) above sea level,[3] the highest peak in the Judaean Desert.[4] Today, the site is controlled[5][6] by the Israel National Parks Authority and is a designated national park. Israel asserts that it is entitled to work the area under the Oslo Accords, but Palestinian authorities say Israel has no right to undertake digs there or remove artifacts to Israel discovered in excavations there.[7]

Herodion is the only site that is named after King Herod the Great. It was known by the Crusaders as the «Mountain of Franks». Arab locals call it Jabal al-Fourdis («Mountain of Paradise»).[8] The Modern Hebrew name, Herodion (Hebrew: הרודיון‬), is actually a transliteration of the Greek spelling. However, modern Israeli archaeologists have confirmed that the site’s original Hebrew name was Herodis (Hebrew: הרודיס‬), just as this name is inscribed in one of the Bar Kokhba letters recovered from the Muraba’at Caves in the Judaean desert.[9]

In 40 BCE, after the Parthian conquest of Syria, Herod fled to Masada. On the way, at the location of Herodion, Herod clashed with the Parthians and emerged victorious. According to the Roman Jewish historian Josephus, he «built a town on that spot in commemoration of his victory, and enhanced it with wonderful palaces… and he called it Herodion after himself» (The Wars of the Jews I, Chapter 13).[10]

«This fortress, which is some sixty stadia[11] distant from Jerusalem, is naturally strong and very suitable for such a structure, for reasonably nearby is a hill, raised to a (greater) height by the hand of man and rounded off in the shape of a breast. At intervals it has round towers, and it has a steep ascent formed of two hundred steps of hewn stone. Within it are costly royal apartments made for security and for ornament at the same time. At the base of the hill there are pleasure grounds built in such a way as to be worth seeing, among other things because of the way in which water, which is lacking in that place, is brought in from a distance and at great expense. The surrounding plain was built up as a city second to none, with the hill serving as an acropolis for the other dwellings.» (The Jewish War I, 21, 10; Antiquities of the Jews XIV, chapter 13.9).

Archaeologists believe that the palace was built by slaves, paid workers (contractors), and architects. Herod was considered one of the greatest builders of his time and was not daunted by geography—his palace was built on the edge of the desert and was situated atop an artificial hill.[12] The largest of the four towers was built on a stone base 18 meters in diameter. This was most likely where Herod lived; he decorated his rooms with mosaic floors and elaborate frescoes. The other three towers, which consisted of living spaces and storage, were 16 meters in diameter. Outside, several cisterns were built to collect water that was channeled into the palace.

Herodium was conquered and destroyed by the Romans in 71 CE.

At the beginning of the Bar Kokhba revolt sixty years later, Simon bar Kokhba declared Herodium as his secondary headquarters. Archaeological evidence for the revolt was found all over the site, from the outside buildings to the water system under the mountain. Inside the water system, supporting walls built by the rebels were discovered, and another system of caves was found. Inside one of the caves, burned wood was found which was dated to the time of the revolt. The fortress was commanded by Yeshua ben Galgula, who was likely Bar Kokhba’s second in command. 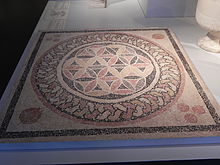 The archaeological excavation of Herodium was begun in 1962 by Virgilio Canio Corbo and Stanislao Loffreda, from the Studium Biblicum Franciscanum of Jerusalem, and it continued until 1967: they discovered the upper citadel, at the top of the hill.[13]

From 1972, excavations were carried out by Ehud Netzer, working on behalf of the Hebrew University of Jerusalem, and they were intermittent until the archaeologist’s death in 2010. Netzer excavated mostly the lower palace, at the base of the hill. 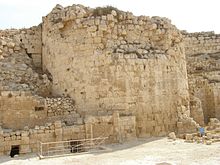 Herod the Great built a palace within the fortress of Herodium. Herod himself commissioned a lavish palace to be built between 23 and 15 BCE atop Herodium for all to see. The palace itself consisted of four towers of seven stories, a bathhouse, courtyards, a Roman theatre, banquet rooms, a large walkway (“the course”), as well as extravagant living quarters for himself and guests. Once Herod died and the Great Revolt started, Herodium was abandoned. The Jews eventually had a base at Herodium where they built a synagogue which can still be seen today, unlike much of Herod’s Palace.[14]

The Roman bathhouse consisted of three areas, the caldarium, the tepidarium, and the frigidarium. It also had a very impressive dome which is still in good condition today despite thousands of years of earthquakes and wars. The caldarium had vaulted ceilings, raised floors, and channels in the walls to conduct heat. The tepidarium had mosaic floors and frescoes just like the living quarters of the palace. The frigidarium, the last stop in the bathhouse, was where guests would cool off in a large pool.

Netzer discovered the Roman Theatre just before his death in late 2010. A loggia, or a theatre box, was discovered. This means that when Herod or other notable officials went to see a play, they would receive luxury treatment. The rest of the audience would be seated below on benches that could accommodate about 650 people. What is quite unique about this find is that frescoes of landscapes were discovered. This suggests that the painters were well traveled; they depict scenes of Italy and even the Nile River in Egypt. It is also assumed that the painters were on loan to Herod from Caesar in Rome.[15][16]

A pre-year-70 synagogue at Herodium is of the Galilean-type, featuring stone benches built along the walls and aisles formed by columns that supported the roof. It is one of the oldest synagogues in the Levant.[17][18]

Hebrew University professor Ehud Netzer reported on 8 May 2007 that he had discovered the tomb of Herod, above tunnels and water pools at a flattened site halfway up the hill to Herodium, 12 kilometres (7.5 mi) south of Jerusalem.[19] Later excavations strengthened the idea that this site is Herod’s mausoleum.[20] The base of the tomb has now been uncovered and is visible to visitors to the site.

The 2009–2010 excavations uncovered near the tomb base a small 450-seat capacity theater with an elaborately decorated royal theater box.[21]

Netzer died in October 2010 from injuries sustained from a fall at the site,[2] and access to the mausoleum was subsequently blocked to the public pending review of the site’s safety.

In October 2013, archaeologists Joseph Patrich and Benjamin Arubas challenged the identification of the tomb as that of Herod.[22] According to Patrich and Arubas, the tomb is too modest to be Herod’s and has several unlikely features.[22][23] Roi Porat, who replaced Netzer as excavation leader after the latter’s death, stood by the identification.[22]

In February 2013 an exhibit dedicated to Herod at the Israel Museum featured finds from among some 30 tons of material transferred from the Herodium site back into Israel.[24] The Palestinian National Authority protested,[25] and Rula Maayah, the Palestinian tourism and antiquities minister said that according to international law Israelis have no right to excavate Herodium, which is in the occupied West Bank, or to take any antiquities from it. Palestinian officials compared the exhibition to the historical plunder of archaeological treasures by former colonial powers.[26] Some Israeli commentators have argued that, such excavations of, and removal of material from, sites in the Palestinian territories go beyond what is permitted to an occupying power such as Israel.[6] One Israeli archaeologist, Yonathan Mizrachi, in an article co-written with Yigal Bronner, stated that,’Since Herodion and Herod’s palaces in Jericho are located in the territories that Israel occupied in 1967, they are — according to international law, the codes of ethics for the preservation of antiquities, and even the Oslo Accords — supposedly under Palestinian control and responsibility.’[24] The Israel Museum’s director , James S. Snyder initially stated that the items from Herodium would be returned to the West Bank after the exhibition, «in better condition than before»,[27] but later clarified that this did not mean the artifacts would be returned to the Palestinians after the exhibition.[28] The site is in Area C, a term used to describe 60% of the West Bank that has been kept under full Israeli control since the 1993 Oslo Accords.[27][29] The Israel Museum cited the Oslo Accords as giving Israel a right to perform archaeology in the territories and said they will return it to the West Bank when the exhibition has ended.[30] In analyzing the controversy, Morag Kersel states that the site is regulated by Israeli military orders, the JordanianTemporary Law no. 51, 1966, and the Oslo Accords. According to the provisions of the Oslo II Accord, archaeological issues of common interest would be handled by a joint Israel-Palestinian committee. Few if any of these agreements have been implemented, and Palestinians have not been consulted or asked to collaborate in the work at the site.[31]

Scientists Planted A 2,000-Year-Old Seed From The Time Of The Bible — And It Actually Sprouted

Nearly 2,000 years ago, around the time of Jesus Christ and at the height of the Roman Empire, a small clay pot was filled with Judean date palm seeds and placed in the palace of King Herrod in Masada, Israel. There it stayed for a couple of millennia, until the 1960s, when the pot was excavated by archeologists.

One of the researchers stored the ancient, seemingly useless seeds into his drawer, and left them untouched for another four decades. Until someone decided to plant them…

After 2,000 years buried in the ancient temple and palace of King Herrod, Judean date seeds were thoughtlessly placed in a researcher’s office drawer. As no one thought that thousands-year-old seeds would grow much of anything, they were largely forgotten…

Until 40 years later, when botanical researcher Elaine Solowey determined it was time to give planting them a try. “I assumed the food in the seed would be no good after all that time,” Elaine said. “How could it be?”

To determine the age of the date seeds, they were radiocarbon-tested. Turns out, they were between 1,995 and 2,110 years old! Even more shocking: after eight weeks, the ancient seeds actually sprouted.

And they didn’t stop. The plant was given the name Methuselah. Here it is at three years old (date plants tend to grow slowly).

Since Methuselah is the only Judean date plant to be grown in centuries, and is actually a “male” plant, he wasn’t going to produce any fruit. So, Elaine decided to use his pollen to pollinate a member of his nearest genetic relative, a female Hayany. And it worked!

The Judean date was an important part of the region’s ancient history—it even appeared on Roman coins—so Elaine hopes to continue planting them.

The goal is to fully bring back the ancient plant species, which would be a huge accomplishment for biodiversity and history. Here’s to Methuselah!

Isn’t it absolutely incredible that this ancient plant was able to sprout after thousands of years? It’s like a piece of history was brought back to life right before our eyes!