Sir Walter Besant (14 August 1836 – 9 June 1901), was a novelist and historian. William Henry Besant was his brother, and another brother, Frank, was the husband of Annie Besant.

The son of a merchant, he was born at Portsmouth, Hampshire and attended school at St Paul’s, Southsea, Stockwell Grammar, London and King’s College London. In 1855, he was admitted as a pensioner to Christ’s College, Cambridge, where he graduated in 1859 as 18th wrangler.[1] After a year as Mathematical Master at Rossall School, Fleetwood, Lancashire, and a year at Leamington College, he spent six years as professor of mathematics at the Royal College, Mauritius. A decline in health compelled him to resign, and he returned to England and settled in London in 1867. From 1868 to 1885 he held the position of Secretary to the Palestine Exploration Fund. In 1871, he was admitted to Lincoln’s Inn.

In 1868 he published Studies in French Poetry. Three years later he began his collaboration with writer James Rice. Among their joint productions are Ready-money Mortiboy (1872), and The Golden Butterfly (1876), both, especially the latter, very successful. This association was ended by the death of Rice in 1882. Thereafter Besant continued to write voluminously by himself, his main novels being All in a Garden Fair (which Rudyard Kipling credited in Something of Myself with inspiring him to leave India and make a career as a writer), Dorothy Forster (his own favorite), Children of Gibeon, and All Sorts and Conditions of Men. The two last belonged to a series in which he endeavored to arouse the public conscience to the hardship among the poorest classes of cities. In this crusade Besant had considerable success, the establishment of The People’s Palace in the East of London being one result. In addition to his fiction, Besant wrote largely on the history and topography of London. His plans for this topic were left unfinished: among his books on this subject is London in the 18th Century. 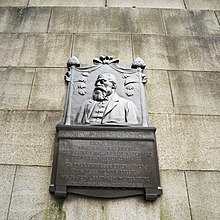 Besant was a freemason, joining the Lodge of Harmony in Mauritius in 1862. He became Master of Marquis of Dalhousie Lodge, London in 1873, having joined in 1869. He was one of the founders of the first Masonic research lodge, Quatuor Coronati Lodge No 2076, of which he was the first treasurer from 1886.[2] He was also one of the founders[3] and first chair[4] of the Society of Authors in 1884. He was knighted in the 1895 Birthday Honours.

He was treasurer of the ‘Atlantic Union’, an association which sought to improve social relations between Britons and Americans.[5] He died in Frognal in London on 9 June 1901, aged 64.[6]

Novels by W.B. and James Rice. Library ed. 10 vols. 1887–88. Comprising in sequence Ready-Money Mortiboy, This Son of Vulcan, With Harp and Crown, The Golden Butterfly, By Celia’s Arbour, The Seamy Side, The Chaplain of the Fleet, The Case of Mr. Lucraft and Other Tales, ‘Twas in Trafalgar’s Bay and Other Stories, The Ten Years’ Tenant and Other Stories [My Little Girl, The Monks of Thelema apparently missing from this series].

Selected Books on London [volumes in the 10-volume Survey of London published by A & C. Black are included under their individual volume titles and marked with an asterisk]