The name is recorded in the Domesday Book as Ilcheton, meaning «settlement of a man called Ylca».[2]

In the Middle Ages Fountains Abbey held land in Ilton, and also had a grange at Pott. In the 16th century Sir Thomas Danby acquired the land at Pott, and in 1658 a later Sir Thomas Danby bought the Ilton land, which has since formed part of the Swinton estates.[3]

Until 1974 Ilton was part of Masham Rural District (before 1934 Masham Urban District) in the North Riding of Yorkshire. It is now part of the Borough of Harrogate in North Yorkshire.

Near the village is the Druids’ Temple, a replica of Stonehenge built in about 1800 by William Danby of nearby Swinton Park.[6] During a time of agricultural depression and high unemployment, Danby hired local men to construct a moderately large-scale replica of Stonehenge, working at a full shilling a day. The result is a folly of national reputation. He was less successful in hiring a silent druidic hermit to fulfill a seven-year contract, though several tried, for the promised annuity.[7] 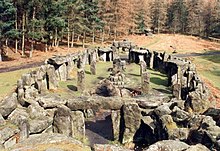