Sir Austen Henry Layard GCB PC (/ˈɔːstɪn ˈhɛnriː ˈlɛərd/; 5 March 1817 – 5 July 1894) was an English traveller, archaeologist, cuneiformist, art historian, draughtsman, collector, politician and diplomat. He is best known as the excavator of Nimrud and of Nineveh, where he uncovered a large proportion of the Assyrian palace reliefs known, and in 1851 the library of Ashurbanipal.

Layard was born in Paris, France, to a family of Huguenot descent. His father, Henry Peter John Layard, of the Ceylon Civil Service, was the son of Charles Peter Layard, Dean of Bristol, and grandson of Daniel Peter Layard the physician. His mother, Marianne, daughter of Nathaniel Austen, banker, of Ramsgate, was of partial Spanish descent.[1] His uncle was Benjamin Austen, a London solicitor and close friend of Benjamin Disraeli in the 1820s and 1830s. Edgar Leopold Layard the ornithologist was his brother.

On 9 March 1869 at St. George’s Church, Hanover Square, Westminster, London he married his first cousin once removed, Mary Enid Evelyn Guest. Enid as she was known was the daughter of Sir Josiah John Guest and Lady Charlotte Elizabeth Bertie. Their marriage was happy but childless.

Much of Layard’s boyhood was spent in Italy, where he received part of his schooling, and acquired a taste for the fine arts and a love of travel; but he was at school also in England, France and Switzerland. After spending nearly six years in the office of his uncle, Benjamin Austen, he was tempted to leave England for Sri Lanka (Ceylon) by the prospect of obtaining an appointment in the Civil Service, and he started in 1839 with the intention of making an overland journey across Asia.[1]

After wandering for many months, chiefly in Persia, with Bakhtiari people and having abandoned his intention of proceeding to Ceylon, he returned in 1842 to Constantinople, where he made the acquaintance of Sir Stratford Canning, the British Ambassador, who employed him in various unofficial diplomatic missions in European Turkey. In 1845, encouraged and assisted by Canning, Layard left Constantinople to make those explorations among the ruins of Assyria with which his name is chiefly associated. This expedition was in fulfilment of a design which he had formed when, during his former travels in the East, his curiosity had been greatly excited by the ruins of Nimrud on the Tigris, and by the great mound of Kuyunjik, near Mosul, already partly excavated by Paul-Émile Botta.[1]

A. H. Layard at Kuyunjik. Drawing by Solomon Caesar Malan, 1850

Layard remained in the neighbourhood of Mosul, carrying on excavations at Kuyunjik and Nimrud, and investigating the condition of various peoples, until 1847; and, returning to England in 1848, published Nineveh and Its Remains (2 vols., 1848–1849).[1]

To illustrate the antiquities described in this work he published a large folio volume of The Monuments of Nineveh. From Drawings Made on the Spot (1849). After spending a few months in England, and receiving the degree of D.C.L. from the University of Oxford and the Founder’s Gold Medal of the Royal Geographical Society, Layard returned to Constantinople as attaché to the British embassy, and, in August 1849, started on a second expedition, in the course of which he extended his investigations to the ruins of Babylon and the mounds of southern Mesopotamia. He is credited with discovering the Library of Ashurbanipal during this period. His record of this expedition, Discoveries in the Ruins of Nineveh and Babylon,[2] which was illustrated by another folio volume, called A Second Series of the Monuments of Nineveh, was published in 1853. During these expeditions, often in circumstances of great difficulty, Layard despatched to England the splendid specimens which now form the greater part of the collection of Assyrian antiquities in the British Museum.[1] Layard believed that the native Syriac Christian communities living throughout the Near East were descended from the ancient Assyrians.[3]

Apart from the archaeological value of his work in identifying Kuyunjik as the site of Nineveh, and in providing a great mass of materials for scholars to work upon, these two books of Layard were among the best written books of travel in the English language.[1] 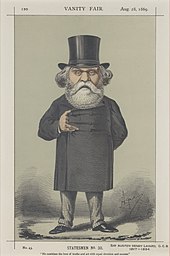 Caricature from Vanity Fair, (Aug 1869) captioned «He combines the love of truth and art with equal devotion and success»

Layard now turned to politics. Elected as a Liberal member for Aylesbury, Buckinghamshire in 1852, he was for a few weeks Under-Secretary for Foreign Affairs, but afterwards freely criticised the government, especially in connection with army administration. He was present in the Crimea during the war, and was a member of the committee appointed to inquire into the conduct of the expedition. In 1855 he refused from Lord Palmerston an office not connected with foreign affairs, was elected lord rector of Aberdeen University, and on 15 June moved a resolution in the House of Commons (defeated by a large majority) declaring that in public appointments merit had been sacrificed to private influence and an adherence to routine. After being defeated at Aylesbury in 1857, he visited India to investigate the causes of the Indian Mutiny. He unsuccessfully contested York in 1859, but was elected for Southwark in 1860, and from 1861 to 1866 was Under-Secretary for Foreign Affairs in the successive administrations of Lord Palmerston and Lord John Russell.[1] After the Liberals returned to office in 1868 under William Ewart Gladstone, Layard was made First Commissioner of Works and sworn of the Privy Council.[5]

Layard resigned from office in 1869, on being sent as envoy extraordinary to Madrid.[6] In 1877 he was appointed by Lord Beaconsfield Ambassador at Constantinople, where he remained until Gladstone’s return to power in 1880, when he finally retired from public life. In 1878, on the occasion of the Berlin Congress, he was appointed a Knight Grand Cross of the Order of the Bath.[1]

Layard retired to Venice. There he took up residence in the sixteenth-century palazzo on the grand canal named Ca Cappello, just behind Campo San Polo, and which he had commissioned historian Rawdon Brown, another long-time British resident of Venice, to purchase for him in 1874.[7] In Venice he devoted much of his time to collecting pictures of the Venetian school, and to writing on Italian art. On this subject he was a disciple of his friend Giovanni Morelli, whose views he embodied in his revision of Franz Kugler‘s Handbook of Painting, Italian Schools (1887). He wrote also an introduction to Constance Jocelyn Ffoulkes‘s translation of Morelli’s Italian Painters (1892–1893), and edited that part of Murray’s Handbook of Rome (1894) which deals with pictures. In 1887 he published, from notes taken at the time, a record of his first journey to the East, entitled Early Adventures in Persia, Susiana and Babylonia. An abbreviation of this work, which as a book of travel is even more delightful than its predecessors, was published in 1894, shortly after the author’s death, with a brief introductory notice by Lord Aberdare. Layard also from time to time contributed papers to various learned societies, including the Huguenot Society, of which he was first president.[1]

He died on 5 July 1894 at his residence 1 Queen Anne Street, Marylebone, London. After a post mortem autopsy his remains were cremated at the Woking Crematorium in Surrey. His ashes were interred in the cemetery of Canford Magna Parish Church in Dorset, England.