With the settlements of Upper and Lower Caldecote, Thorncote, Hatch, Brook End, Cow Pastures, Vinegar Hill and Budna, the hamlet of Ickwell makes up the civil parish of Northill.[1]

The manor of Ickwell (or Ickwell Bury) was part of the Barony of Eaton, with the other lands in Bedfordshire of Eudo, son of Hubert. Before 1284, it was given by William Hobcote to the prior of the Knights Hospitaller of St John of Jerusalem, who held it through the Dissolution of the Monasteries, relinquishing it in 1544. It was then granted by the Crown to John Barnardiston, whose heirs sold it in 1680 to John Harvey, who rebuilt the manor house in 1683 and whose family held it until the twentieth century.[2]

Cricket has been played on Ickwell Green for more than one hundred and twenty years, and Ickwell Green Cricket Club is one of the oldest such clubs in Bedfordshire.[3]

Ickwell was the home village of the English master clockmaker and watchmaker Thomas Tompion (c. 1639–1713), and Ickwell Green still boasts the family cottage, which is maintained by the Worshipful Company of Clockmakers. Tompion was the son of a local blacksmith, another Thomas Tompion, and is believed to have worked at Ickwell as a blacksmith, but to have left by 1665 when his father died and the smithy was taken on by his younger brother, James.[4]

All parts of the parish of Northill share a war memorial, which is at Ickwell Green and takes the form of a stone cross made of Portland stone bearing a bronze sword of sacrifice, designed by the architect Sir Reginald Blomfield.[1] 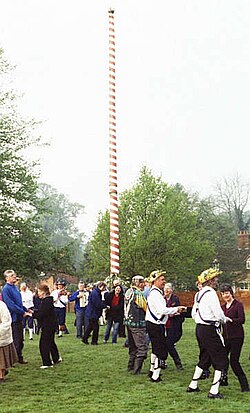 Villagers & Morris-men dancing beside the Maypole on Ickwell Green, soon after dawn on 1 May 2005

The Ickwell May Day festival, first documented in the Churchwardens‘ accounts of c. 1565 but perhaps originating in the pre-Christian Beltane, takes place on Ickwell Green and celebrates the arrival of spring on May Morning, or 1 May. In the time of the Puritans, the festival ceased. A permanent Maypole was first erected in 1872 by the local squire, John Harvey, to celebrate the birth of his son. There is Morris dancing by the Ickwell Mayers, the Old Scholars dance around the Maypole with their children and grandchildren, and with other games, contests, country dances, and music a May Queen is crowned.[5][6]