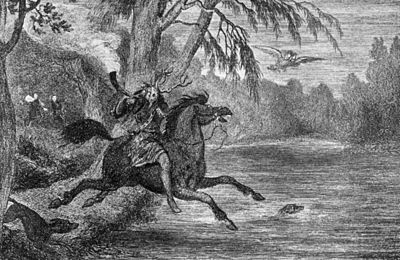 Herne with his steed, hounds and owl, observed by the Duke of Richmond and the Earl of Surrey, in Harrison Ainsworth‘s Windsor Castle, illustrated by George Cruikshank, c.1843.

In English folklore, Herne the Hunter is a ghost associated with Windsor Forest and Great Park in the English county of Berkshire. He is said to naturally have antlers upon his head, ride a horse, torment cattle, and rattle chains. The earliest mention of Herne comes from William Shakespeare‘s 1597 play The Merry Wives of Windsor, and it is impossible to know how accurately or to what degree Shakespeare may have incorporated a real local legend into his work, though there have been several later attempts to connect Herne to historical figures, pagan deities, or ancient archetypes.

There is little written evidence for Herne the Hunter before the 1840s, and the details of his original folk tale have been filtered through the various versions of Shakespeare‘s The Merry Wives of Windsor. Officially published versions of the play refer only to the tale of Herne as the ghost of a former Windsor Forest keeper who haunts a particular oak tree at midnight in the winter time,[1] wearing horns, shaking chains, and causing cows to produce blood instead of milk:

The earliest written account of Herne comes from The Merry Wives of Windsor in 1597:

Sometime a keeper here in Windsor Forest,
Doth all the winter-time, at still midnight,
Walk round about an oak, with great ragg’d horns;
And there he blasts the tree, and takes the cattle,
And makes milch-kine yield blood, and shakes a chain
In a most hideous and dreadful manner.
You have heard of such a spirit, and well you know
The superstitious idle-headed eld
Receiv’d, and did deliver to our age,
This tale of Herne the Hunter for a truth.

An early, pirated version of the play from 1602 includes a different version of this text, which states that the ghost (spelled «Horne» in this version) was invented to scare children into obedience, and that mothers tell their children the tale of a ghost who walks the forest in the form of a great stag. Because it is a common surname, it is not possible to further identify Shakespeare’s Herne, and no earlier references to his legend exist.[2]

Two hundred years later, in 1792, Samuel Ireland slightly expanded on Shakespeare as follows: “The story of this Herne, who was keeper in the forest in the time of Elizabeth, runs thus: – That having committed some great offence, for which he feared to lose his situation and fall into disgrace, he was induced to hang himself on this tree.”[3] It has been noted that the reference to Herne’s death as a suicide fits a traditional belief that this sort of death is more likely to produce a haunting. Shakespeare’s reference to rattling chains also fits a very common ghostly motif. However, other elements of the tale are unusual for other ghost stories of Shakespeare’s era. Ghostly cattle or dogs were common, but there are few contemporary examples of a ghostly stag. It is possible that Shakespeare invented this detail to better fit the forest setting, or to lead into the humorous image of a character wearing antlers, which would have resembled cuckold’s horns to an Elizabethan audience.[2] It was also unusual for ghosts of this period to produce such damaging effects. Herne is described bewitching («taking») cattle, bloodying their milk, and causing trees to wither.[2]

Herne became widely popularized after his appearance in Shakespeare’s play, and the supposed location of Herne’s Oak was, for many years, a matter of local speculation and controversy. Some Ordnance Survey maps show Herne’s Oak a little to the north of Frogmore House in the Home Park (adjoining Windsor Great Park). This tree was felled in 1796. In 1838, Edward Jesse claimed that a different tree in the avenue was the real Herne’s Oak, and this gained in popularity especially with Queen Victoria. This tree was blown down on 31 August 1863, and Queen Victoria had another tree planted on the same site. The Queen’s tree was removed in 1906 when the avenue was replanted.

One of the new oaks planted in 1906 is currently given the title of Herne’s Oak.[2]

Further details have entered the folklore from even later sources and reported sightings, such as those in the 1920s.[4] William Harrison Ainsworth‘s 1843 novel Windsor Castle featured Herne and popularised his legend. Ainsworth’s version of the tale added a number of new details, including having Herne being gored by a stag, only to have the Devil save him on the condition that he wear the stag’s antlers. Jacob Grimm was the first to suggest, very influentially, that Herne had once been thought of as the leader of the Wild Hunt, based on his title.[2]

In the 20th century, further details were added to Herne’s legend, including the idea that his ghost appears shortly before national disasters and the deaths of kings. It was also during the 20th century that incidents of personal encounters with the ghost, or of people hearing his hounds and horn in Windsor Forest, were first reported.[2]

Various theories have been proposed to account for the origin of the character, none of which has been proved conclusive, and the source for many of the tales told of Herne remain unknown.

Palæolithic origins and relationship with the Celtic Cernunnos

In his 1929 book The History of the Devil – The Horned God of the West Herne R. Lowe Thompson suggests that «Herne» as well as other Wild Huntsmen in European folklore all derive from the same ancient source, citing that «Herne» may be a cognate of the name of Gaulish deity Cernunnos in the same way that the English «horn» is a cognate of the Latin «cornu» (see Grimm’s Law for more details on this linguistic feature) explaining that «As the Latin cornu changes into horn so might Cerne change into Herne.» and adding «In any case the reader may also be prepared to recognize Cernunnos and the older magician, who emerge as the Wild Huntsman. My assumption is that these two forms have been derived from the same Palæolithic ancestor and can, indeed, be regarded as two aspects of one central figure, will help us to understand the identification of Herlechin and Herne, whom I will take as the most familiar example of the huntsman.»[5] Some modern Neopagans such as Wiccans accept Lowe Thompson’s equation of Herne with Cernunnos (which they further connect to the Greco-Roman god Pan).[6] Herne however is a localised figure, not found outside Berkshire and the regions of the surrounding counties into which Windsor Forest once spread. Clear evidence for the worship of Cernunnos has however been recovered only on the European mainland, and not in Britain.[7] «Herne» could be derived ultimately from the same Indo-European root, *ker-n-, meaning bone or horn from which «Cernunnos» derives.[8] However a more direct source may be the Old English hyrne, meaning «horn» or «corner»,[9][10][11] which is inconsistent with the Cernunnos theory.[12]

In the Early Middle Ages, Windsor Forest came under the control of the pagan Angles who worshipped their own pantheon of gods, including Woden, whose Norse equivalent Odin rode across the night sky with his own Wild Hunt and hanged himself on the world tree Yggdrasil to learn the secret of the runic alphabet. It has been suggested that the name Herne is derived from the title Herian,[13] a title used for Woden in his role as leader of fallen warriors (Old Norse: Einherjar).[14][15][16][17]

Samuel Ireland identified Herne as a real historical individual, saying that he died an unholy death of the type that might have given rise to tales of hauntings by his unquiet spirit.[3][non-primary source needed] The fact that Herne is apparently a purely local figure supports this theory. One possibility is that Herne is supposed to be the ghost of Richard Horne, a yeoman during the reign of Henry VIII who was caught poaching in the wood. This suggestion was first made by James Halliwell-Phillipps, who identified a document listing Horne as a «hunter» who had confessed to poaching.[18] The earliest edition of The Merry Wives of Windsor spells the name «Horne».[19]