Caer (Welsh pronunciation: [kɑːɨr]; Old Welsh: cair or kair) is a placename element in Welsh meaning «stronghold», «fortress», or «citadel»,[1] roughly equivalent to the Old English suffix now variously written as -caster, -cester, and -chester.[2][3] In modern Welsh orthography, caer is usually written as a prefix, although it was formerly—particularly in Latin—written as a separate word. The Breton equivalent is kêr, which is present in many Breton placenames as the prefix Ker-. The term is thought to have derived from the Brittonic *kagro- and to be cognate with cae («field, enclosed piece of land»).[4] Although stone castles were largely introduced to Wales by the invading Normans, «caer» was and remains used to describe the settlements around some of them as well. An example is the Roman fort at Caernarfon, formerly known in Welsh as Caer Seiont from its position on the Seiont; the later Edwardian castle and its community were distinguished as Caer yn ar Fon («fort in the land opposite Anglesey«).[2] However, the modern names of the Roman fort and Edwardian castle themselves are now Segontiwm or Castell Caernarfon, while the communities carry on the name caer.

Gildas‘s account of the Saxon invasions of Britain claimed that there were 28 fortified Roman cities (Latin: civitas) on the island, without listing them.[6] The History of the Britons traditionally attributed to Nennius includes a list of the 28, all of which are called «caer».[5][10] Controversy exists over whether this list includes only Roman cities or a mixture of Roman cities and non-Roman settlements[11]. Some of the place names that have been proposed include: 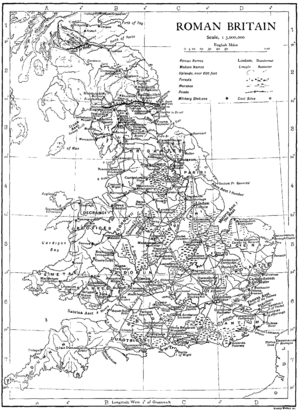 Caernarfon derives its name from the Edwardian Caernarfon Castle, although it is now known in Welsh as Castell Caernarfon… 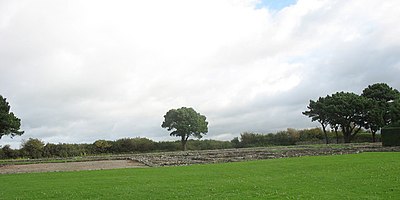 …while the Roman fort now known as Segontium derived its name from a Latinization of the British community along the Afon Seiont.[2]

Examples in modern Wales include: 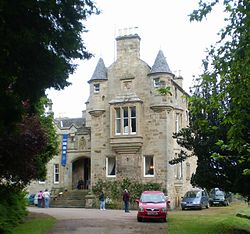 Carriden House, a refurbished Roman fort which formerly formed part of the Antonine Wall in Scotland.

Southern Scotland, the former Old North of the Romano-Britons, contains many modern placenames with variant forms of caer, including: