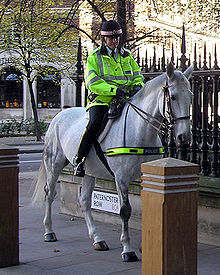 A mounted officer of the City of London Police entering Paternoster Row in November 2004.

Paternoster Row was a street in the City of London that is supposed to have received its name from the fact that, when the monks and clergy of St Paul’s Cathedral would go in procession chanting the great litany, they would recite the Lord’s Prayer (Pater Noster being its opening line in Latin) in the litany along this part of the route. The prayers said at these processions may have also given the names to nearby Ave Maria Lane and Amen Corner. An alternative etymology is the early traders who sold a type of prayer bead known as a «pater noster».

The area was a centre of the London publishing trade,[1][2] with booksellers operating from the street.[3] In 1819 Paternoster Row was described as «almost synonymous» with the book trade.[4]

Trübner & Co. was one of the publishing companies on Paternoster Row. The street was devastated by aerial bombardment during the Blitz of World War II, suffering particularly heavy damage in the night raid of 29–30 December 1940, later characterised as the Second Great Fire of London, during which an estimated 5 million books were lost in the fires caused by tens of thousands of incendiary bombs.[5]

In 2003 the street was replaced with Paternoster Square, the modern home of the London Stock Exchange, although a City of London Corporation road sign remains in the square near where Paternoster Row once stood.

Printers and booksellers based in Paternoster Row

Title page of An Essay on the Management of the Present War with Spain printed for T. Cooper at The Globe

Note: Before c. 1762 premises in London had signs rather than numbers.

Others based in Paternoster Row