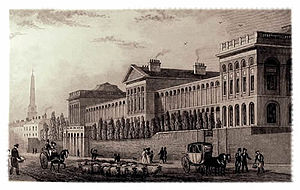 St Luke’s Hospital for Lunatics on Old Street London. The obelisk spire of St Luke’s Church can be seen in the background.

St Luke’s Hospital for Lunatics was founded in London in 1751 for the treatment of incurable pauper lunatics by a group of philanthropic apothecaries and others. It was the second public institution in London created to look after mentally ill people, after the Hospital of St. Mary of Bethlem (Bedlam), founded in 1246.[1][2] 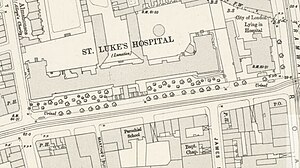 1896 map of Old Street showing a plan of the hospital.

The first chief physician was Dr William Battie who was renowned as ‘an eccentric humorist’. He believed ‘the patients of this hospital shall not be exposed to publick view.’ Medical treatment consisted of cold plunge baths to shake lunatics out of their insanity. A system of non-restraint was professed, however manacles and other restraints were sometimes used.[3]

The hospital was originally housed in a converted foundry in Windmill Street, Upper Moorfields, close to Bedlam. It was designed by George Dance the Elder in 1750-1; after his death his son George Dance the Younger succeeded him as surveyor to the hospital. It was originally built for 25 patients, but was enlarged and by 1771 was overcrowded. A decision was made to build a larger hospital on a new site. The design was put out to competition, which was a novelty at the time. None of the competition entries was successful however, and Dance was asked to design the new building.[4]

In 1786 the hospital moved to Dance’s purpose-built premises on Old Street, between Bath St and what is now the City Road roundabout. The building had a magnificent frontage of clamp brick, 500 feet (150 m) long,[4] which had a central entrance, with the male wards to the left and female wards to the right.[3] The building contained single cells for 300 patients, each with small windows set high in the wall, no heating, and loose straw on wooden bedsteads.[3]

By 1865 it had a population of 150 to 160 patients, taken from the middle classes, its original purpose of supporting paupers having been abandoned.[5] The proportion of cures at St. Luke’s was 67 to 70 per cent compared to that of only 15 per cent at pauper lunatic asylums .[1]

Behind the main building were two gardens for the exercise of the less disturbed inmates, one for men and another for women. More dangerous residents were kept inside, or in their cells. The treatment regime consisted of cold plunge baths, and a focus on the gastrointestinal system with the administration of anti-spasmodics, emetics (to induce vomiting) and purgatives.[3]

All patients were transferred to other institutions or their homes in 1916, and the buildings were acquired by the Bank of England to become the St Luke’s Printing Works, used for printing bank notes until the early 1950s.[5][6] The building was demolished in 1963.[3]

In 1922 it was suggested that a psychiatric unit should be instituted by the original St Luke’s charity in cooperation with a general hospital. This led to the funding by the charity of both an out-patient clinic and a psychiatric in-patient ward at the Middlesex Hospital. A new St Luke’s, the third, was opened at Woodside Avenue, Muswell Hill, in 1930 by Princess Helena Victoria.[7] This was variously known as Woodside Nerve Hospital, St Luke’s Woodside Hospital for Functional Nervous Disorders and from 1948 as St Luke’s Woodside.[5]

In 2011 the NHS Trust responsible for St Luke’s Woodside, Camden and Islington Foundation Trust, successively closed all wards, leaving open only an occupational therapy unit and effecting closure by stealth without the consultation process required of formal closure proposals. The site was then put up for sale.[8]

The archive of St Luke’s spans 1750-2001 and the Hospital papers have been digitised by the Wellcome Library.

From Wikipedia, the free encyclopedia
This article is about the historic church building in Islington. For the original parish, see St Luke’s, Islington.

St Luke’s is a historic Anglican church building in central London in the EC1 postcode district, it is located in the London Borough of Islington. It is now a music centre operated by the London Symphony Orchestra and known as LSO St Luke’s. It is the home of the LSO’s community and music education programme, LSO Discovery. The main body of the church seats up to 372 and is used by the LSO for rehearsals, and by a wide variety of musicians for performances and recording. Additional rooms in the crypt provide practice facilities for professional musicians, students and community groups.

The church is sited on Old Street, north of the City of London, and was built to relieve the church of St Giles-without-Cripplegate, Cripplegate,[1] under the Commission for Building Fifty New Churches, an attempt to meet the religious needs of London’s burgeoning 18th century population. It was completed and the corresponding parish of St Luke’s created in 1733.

The church was designed by John James, though the obelisk spire, a most unusual feature for an Anglican church, the west tower and the flanking staircase wings were by Nicholas Hawksmoor.[2] It stood in the historically marshy Moorfields area, and from an early date suffered from problems of subsidence.

Buried in the small churchyard are architect George Dance the Elder, at one time a member of the vestry, and in a chest tomb, father and son type founders William Caslon.[3]The naturalist, Mark Catesby, is also buried in the churchyard. 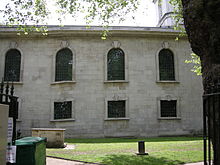 The north side of St Luke’s, showing the distortion of the windows caused by the subsidence which brought about the church’s closure

The parish was absorbed into St Giles-without-Cripplegate, City of London in 1959 and the font and organ case from St Luke’s was moved there. The church was closed by the Church of England Diocese of London in 1964 after subsidence made it unsafe, and it lay empty. The roof was removed two years later for safety reasons and the shell became a dramatic ruin for 40 years, overgrown with trees, despite being a Grade I listed building.

After several controversial proposals to redevelop offices inside the retained walls, it was converted by the St Luke Centre Management Company Ltd for the London Symphony Orchestra as a concert hall, rehearsal, recording space and educational resource. The conversion was designed by Axel Burrough at London architects Levitt Bernstein, who installed a heavy concrete slab roof which keeps out traffic noise from the nearby road. Though this is similar in profile to the former eighteenth century roof, its great weight is supported on tall steel columns inside the hall described by the designer as ‘tree-like’. The interior acoustic can be varied for different events, from full orchestra to soloists, by the use of absorbent surfaces that unroll like blinds across the ceiling and down the walls, whilst the seating and staging is also highly flexible.[4] A total of 1053 burials were recorded and removed during the restoration of the crypt. A documentary «Changing Tombs» covering the removal of the burials was produced at the time and can be found on YouTube.

The venue regularly hosts open rehearsals by the London Symphony Orchestra in advance of concerts at the nearby Barbican Hall, and has pioneered genre-busting events such as the Eclectica series, which combines classical, jazz, experimental and electronic sound-worlds.[5]

During 2006 the BBC used the venue to record concerts by Bruce Springsteen and Paul Simon for broadcast.

Sir Elton John also recorded a concert to publicise his album The Captain & the Kid.

In 2007 MTV used the venue to record a concert from Editors, for broadcast in the same year.

Van Morrison recorded a concert at St Luke’s on BBC Four Sessions on 25 April 2008 featuring songs from his 2008 album, Keep It Simple.[6]

In September 2008, Duffy played there for BBC Sessions; the concert was televised 12 October 2008.