From high Himalayas in Sikkim, India. 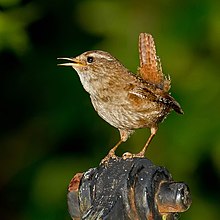 The Eurasian wren (Troglodytes troglodytes) is a very small bird, and the only member of the wren family Troglodytidae found in Eurasia and Africa (Maghreb). In Anglophone Europe, it is commonly known simply as the wren. It was once lumped with Troglodytes hiemalis of eastern North America and Troglodytes pacificus of western North America as the winter wren. The Eurasian wren occurs in Europe, a belt of Asia from northern Iran and Afghanistan across to Japan. It is migratory in only the northern parts of its range.[2] It is also highly polygynous, an unusual mating system for passerines.

The scientific name is taken from the Greek word «troglodytes» (from «trogle» a hole, and «dyein» to creep), meaning «cave-dweller»,[3] and refers to its habit of disappearing into cavities or crevices whilst hunting arthropods or to roost. The taxonomy of the genus Troglodytes is currently unresolved, as recent molecular studies have suggested that Cistothorus spp. and Thryorchilus spp. are within the clade currently defined by Troglodytes.

In European folklore, the wren is the king of the birds, according to a fable attributed to Aesop by Plutarch,[10] when the eagle and the wren strove to fly the highest, the wren rested on the eagle’s back, and when the eagle tired, the wren flew out above him. Thus, Plutarch implied, the wren proved that cleverness is better than strength. The wren’s majesty is recognized in such stories as the Grimm Brothers’ The Willow-Wren and the Bear. Aristotle[11] and Plutarch called the wren basileus (king) and basiliskos (little king). In German, the wren is called Zaunkönig (king of the fence). An old German name was “Schneekönig” (snow king), and in Dutch, it is “winterkoning” (winter king), which all refer to king. In Japan, the wren is labelled king of the winds.

It was a sacred bird to the druids, who considered it «king of all birds»,[12] and used its musical notes for divination. The shape-shifting Fairy Queen took the form of a wren, known as «Jenny Wren» in nursery rhymes. A wren’s feather was thought to be a charm against disaster or drowning.

The wren also features in the legend of Saint Stephen, the first Christian martyr, who supposedly was betrayed by the noisy bird as he attempted to hide from his enemies. Traditionally, St. Stephen’s Day (26 December) has been commemorated by Hunting the Wren, wherein young wrenboys would catch the bird and then ritually parade it around town, as described in the traditional «Wren Song». The Wren, the Wren, the king of all birds, St. Stephen’s day was caught in the furze. Although he is little, his family’s great, I pray you, good landlady, give us a treat.[13] The tradition, and the significance of the wren as a symbol and sacrifice of the old year, is discussed in Sir James Frazer’s The Golden Bough.[14]

According to Suetonius, the assassination of Julius Caesar was foretold by an unfortunate wren. On the day before the Ides of March, a wren was seen being pursued in a frenzy by various other birds. With a conspicuous sprig of laurel clamped in its beak, the wren flew desperately into the Roman Senate, but there its pursuers overtook it and tore it to pieces.[15]